Who can possibly make better air hockey table than the NHL itself? You are right, NHL would not put their name on a product that would be deceiving, would they? We put together reviews of the most popular NHL air hockey tables so that you don't have to.

However, if you were simply looking for the best  "air hockey" tables, then you should read our air hockey table buying guide. 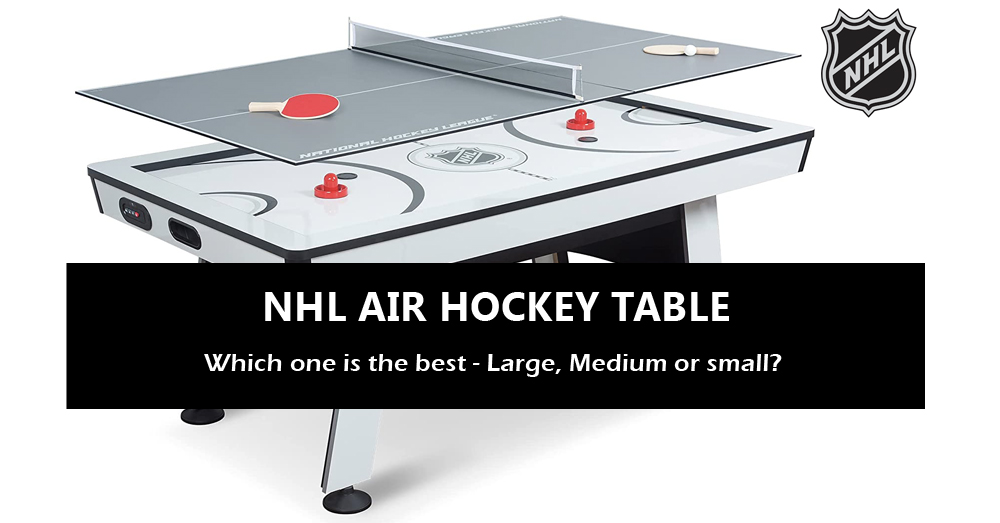 If you don't have time to read the entire article, don't worry, here's a short summary of the best NHL air hockey tables.

Play like in the big league with an air hockey table? That's possible.

What is the NHL?

In case you don't know, the NHL is the National Hockey League. Even though Hockey and Air Hockey are not directly affiliated; it makes sense for the NHL to offer air hockey tables that look and feel like a game of air hockey.

After all, air hockey is what is closest to hockey, and it can be played year round from the comfort of your home.

Who makes these tables?

The NHL itself doesn't manufacture air hockey tables. Their core activity is to manage the professional hockey game so they hands are full.

To promote the NHL though, they can ask a reliable manufacturer to make a table on their behalf or sell the rights to use the NHL and hockey teams logos, for a fee, to manufacturers of air hockey tables. This is a common. For example, MD Sports makes tables for ESPN.

In this case, EastPoint manufactures a couple of air hockey table featuring the NHL logos and sometimes NHL teams.

What are the different NHL table types?

We believe there are 2 main types of NHL air hockey tables:

In this article, we will mostly cover the air hockey tables, but you can learn more about bubble hockey.

If you are looking for a great entry-level air hockey table that doesn't take too much space, this ESPN option is probably the best one at this price.

On this table, NHL is featured in the center of the table of air hockey, as well as on the sides of the ping-pong table, and on the legs. Beside the logo, you won't see logos of teams or anything else related to the NHL.

The EastPoint Hockey + TT table is a delight.

This table brings 2 great activities to your home, for the price of one. Even though the current price seems to be slightly over $500, we thought this table deserved to be here and totally worth the extra dollars.

Everything about this table is made with quality in mind and your family will have a lot of fun playing air hockey and table tennis. We absolutely love this table and we think you will love it too.

Not to big, easy to set up, air powered, featuring LED scoring and logos of all NHL teams.

If you are looking for a NHL air hockey table at an affordable price, this might be the one. I can already imagine the kids playing against each other pretending to represent the team they draw. (this is how the Arizona Coyotes won the league).

This table features the same types of logos as the previous one. Great for tournaments.

We like how the 48" NHL air hockey table from Eastpoint looks. With all the NHL logos and checking some important boxes such as tracking points with electronic scoreboard, air flow and a decent size that can fit in most rooms.

However, this table is definitely worth its price. For less than $200, you might get a table that doesn't live up to your standards and may break down earlier that you expected.

But, in case you break down after some decent use, you can actually afford to buy another one, or something else. Not that bad after all.

Looking for a mini/small table, this table from Eastpoint might be marking the end of your search.

Because it is small, it is very easy to slide under the bed or in the closet. Naturally designed for kids, its size doesn't alter the game play. In other words, young ones will love it.

On this table, NHL is featured in the center of the table as well as on the legs with a simple logo. On the table sides, however, you will see the logo of all the NHL franchises, as well as a logo of the Western and Eastern conference.

Simple, affordable and small NHL table that could be perfect for your kids.

Even though it is table top, it will most likely be played on the floor.

In case you are into rod hockey, we also like this alternative from Stiga.