If you're looking to learn more about the rules of air hockey, you're in the right place. This Air Hockey 101 Guide has everything you need to know...

Air hockey seems like a simple game, and in many ways it is.

While everyone knows that you have to hit the puck into the opponent's goal, there are specific rules designed to keep the game fair.

Now let's begin the guide... If you are looking for something specific, you can use the links below.

Use These Links to Navigate this Guide >>
About Air Hockey
Who's This Guide For?
Starting the Game
The Coin Flip
The Face Off
Fall Start
Scoring & Goal Tending
Boundaries
Time Out & Interference
Sanctioned Equipment
Tables
Strikers or Mallets
Gloves and Tape
Pucks
Wrap-Up

For that reason, we play by the rules of the United Air Hockey Association that can be found here.

Who's This Guide For?

That being said, if you are going to be competing in an air hockey tournament, then we recommend referring to the rules of the body that's governing that specific competition. They shouldn't be too far off, but will have some more nuances on things like referee rules and player conduct that wouldn't apply outside of a tournament setting.

Before any action is taken, a coin is flipped. The player who wins the coin toss gets to decide which side of the table they want to take.

All matches start with a coin flip to determine sides.

After the game, these sides are switched until the entire match is complete. Tournament matches are usually 7 games, however if you're playing a best of 3 or 5, players can switch sides between games in the same fashion.

The face-off  goal is to fight for the possession of the air hockey puck, between the opposing players. The face-off is performed at the start of the first game of a match and is administered by the referee in tournament play. The referee will place the puck in the middle and hold it in place. While it's being held, players can move their strikers/mallets within one inch of the puck. The referee will ensure both players are ready and then do a 4-count. After the puck is released, players can then go for the puck. The release of the puck should be done in a neutral fashion without moving it in one direction or the other.

Starting at the 1 minute mark, this video is a great example of how the face-off works.

The face off is won when clear possession of the puck is gained by one player or a goal is scored. The puck has to leave the center line for the face off winner to be determined.

A false starts occurs when players jump the gun too early and touches the puck before it is released. Both players are allowed one false start, but on the second one, the opposing player gains possession of the puck.

Note for Casual Play: If you don't have a third party or referee to begin a face off, feel free to let the coin toss determine which player takes possession as it will be hard to do a proper face off with just two people.

As you might imagine, scoring occurs when the puck makes its way into the goal. One point of confusion is whether a goal counts if the puck bounces out of the goal mouth. This does not count as a goal.

Another scenario that occurs quite frequently is that a player will hit the puck into their own goal. This does count as a goal for the opposite player, so be sure not to do that by accident!

Goal tending is considered any way of blocking the puck outside of typical mallet use. Typically, this occurs by "palming" or "topping".

Palming: Palming is when a player uses any part of themselves to touch the puck. This includes any limbs or even their clothing. If a player intentionally palms the puck when its en-route to the goal then that player gets the harshest penalty in air hockey, the technical foul. When a technical foul is called, the innocent player gets a free shot on their opponents goal, so be sure never to use your hands or limbs. Please note that you can't intentionally make the other person get called for palming by shooting the puck off the table at them. If the puck leaves the table and strikes someone, it doesn't count as palming.

Topping: Topping the puck is when a player uses their mallet to cover the puck, essentially holding it or stopping in its tracks. This doesn't incur a technical foul, but rather a regular foul which simply means that the guilty player gives up possession of the puck.

Power Loss: If the air hockey table loses power and a shot was fired before the table lost its power, the goal can still count if that shot makes it in the goal.

Related: To learn how to hold a mallet properly and do trick shots, check out our Air Hockey Strategies and Tips Guide.

The boundaries of air hockey are anything that is flat on the table. This includes the table surface itself, the sides of the rails, the goals, and the mallets. Should a player touch anything else (this includes the top of the rails) then the puck is out of play and the game is paused. In the event that the puck hits something outside the table and then falls back on the table, the game is still paused. In other words, once the puck is out of bounds, it's out.

To resume play, possession of the puck is typically granted to the player who was not at fault.

However, there is an exception:

The boundaries rule-set can get quite confusing, and isn't the easiest to put into practice without a third party referee. If you're playing casually or practicing, try to work with these the best you can, but be sure to be up on any competition specific rules before entering.

If you're playing with a friend, then time outs are something that you can play by ear. But if you're trying to adhere to official tournament-play rules, then players that don't have possession of the puck cannot call a time out. This keep things fair and prevents players from hindering their opponents flow while they're on offense.

If a referee is present, then the referee has the right to call interference. This would occur in due to any blatant distractions from the environment (noise, foreign objects, etc). If the referee calls interference, then any goals scored after the call wouldn't count. When the game is resumed from a referee induced interference call, then the puck is returned to the player who had possession originally.

For the game to be player properly, USAA guidelines have sanctioned certain types and brands of equipment for the game. Many of the alternatives cannot support a full-speed competitive air hockey game.

Perhaps the most important piece of sanctioned equipment is the air hockey table itself. The competitive-grade tables have attributes for airflow, sizing, goal-ends, and surface that cannot be replaced by cheaper alternatives. If you're going to be practicing at home, you should have a commercial-grade table made by one of the three sanctioned manufacturers.

To date, there are only three brands that make competition-grade air hockey tables: Brunswick, Dynamo, and Gold Standard Games.

Shields are allowed to be attached to the table so long as its OK with both players. Shields basically cover the outside rails to bounce the puck back if it happens to move off of the table.

Note: Official play is only sanctioned under the white light and not under any black lighting or "cosmic" mode featured on some of these tables.

Air hockey strikers have maximum weight and size requirements that should be adhered to for competitive play. These requirements are designed so players don't gain special defensive or offensive advantages. 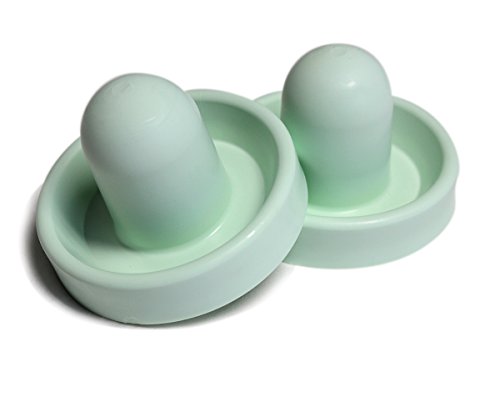 If you are looking for a professional set of goalie mallets and pucks, check the set below:

Players are allowed to use any color of mallet that they'd like with one exception. The color of the outside of the mallet should not match or be of a similar to the surface of the table.

In a competitive environment, the referee would actually approve the mallet, but if you're just practicing, do your best to stick to the requirements!

Gloves and tape are often used as accessories to the mallets. As we discuss in our air hockey strategy guide, the proper grip involves placing your fingers inside rather than gripping it from the top. This allows players to create a whipping motion when hitting the puck to generate maximum speed.

Some players like to use glove, tapes, bands or other devices to keep the mallet secured to their hand or just for extra comfort. Generally speaking, such devices are allowed as long as they don't come in contact with the puck during the game.

For official play, there are only three pucks that are sanctioned:

Example of a Lexan Yellow Puck via Amazon

Tournament rules indicate that a single layer of white plastic tape must be applied to the top layer of the puck. Multiple layers can be applied, but only if both players agree.

If you're playing more casually, just be sure to use one of the sanctioned pucks. Most other pucks aren't designed for high-speed play and are more likely to not glide correctly or even worse, go flying off of the table.

For full details about the rules of Air Hockey, you can consult the official USAA rules. We created this guide hoping to make it easy to understand for players who are just starting out and want to practice properly. There is a bunch more on referee expectations and player conduct to be found in the official rule-set. Be sure to look that over before entering any official or unofficial tournaments.

If you have any questions or felt that something should be more clear, please do let us know in the comment section below.

You can even let us know if you modify the rules a bit to make training and practicing more efficient.