"He shoots.... he scores!" This commonly used phrase in sports can be applied to multiple games, but is usually heard from basketball and hockey announcers. As far as table games go, it's also perfectly suited to air hockey and arcade-style basketball. With these basketball and air hockey table combos, shouting that famous phrase doesn't have to be limited to TV announcers. You can be shouting it with your friends and family all night long as you compete to put the ball in the net or the puck in the goal.

Let's check out the tables...

How We Picked These Games

We did our best to pick the top quality tables, but there simply weren't that many to choose from, so we had to work with what we found. Even though beggars can't be choosers, we would have loved to see some larger options available, but that probably would have been difficult to engineer.

Was There One We Liked Best?

Unfortunately we can't recommend any of these models as stellar. As we mentioned, the available options for air hockey and basketball combos are quite small, so we didn't have too much to work with.

Based on our research, all of these models lack something. The biggest problem we found is that air hockey and basketball tables aren't as heavy-duty or sturdy compare to what people might be used to in the arcade.

We aren't saying they are terrible, but we just want to make it clear that they aren't the best air hockey tables nor basketball games that one can buy.

But if we had to pick, we think the Hathaway Accelerator tables are the best on the list.

If you want the cream of the crop (for each game), it's better to go with the respective standalone model.

For example, this indoor basketball game from Amazon is going to be a lot higher quality than any of the combo tables with air hockey. 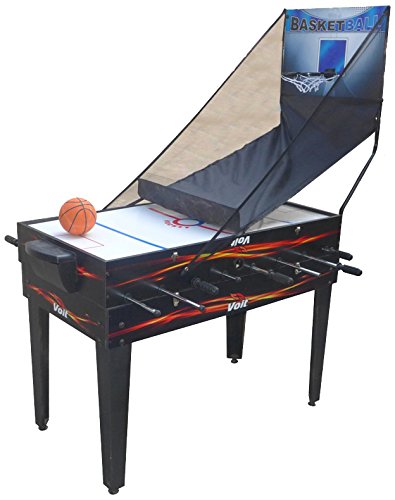 The table starts with Billiards and then the other games can be clipped on top of it with the little fastens on the side of the table. The basketball hoop gets put into two holes at the back. Once it's attached, it stands 54" tall.

As far as reported complaints about this table (of poor design and missing parts), this one seems to have the fewest at the time that we're writing this. Many of the other air hockey tables with basketball are plagued with such complaints

What we'd change: It would be nice if the air hockey actually had air and if the entire thing was overall bigger, but other than that, this table is a decent compromise for all of the games you get. 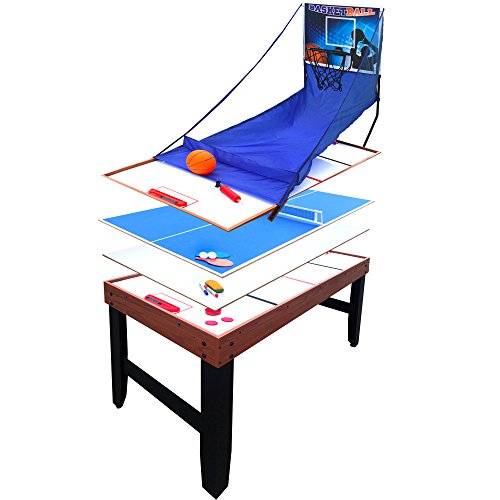 The thing that makes the Hathaway slightly superior to the Voit is its sizing and air flow. At 52.75" x 25.75" x 28.7"(LWH), it's got a whole 7" in length to the Voit while still being quite compact. The installed basketball hoop also measures a bit higher at 62". Although some people call it a 4-in-1 table, this model actually doesn't have four games. It comes included with:

Now unless you're going to play Tic Tac Toe, we're not sure that we'd consider a white board a table game. We prefer to use white boards for things like planning and grocery lists.

The good thing about this table is that it actually has a blower fan for air hockey. This is possible because without the Foosball table, it leaves room for the air hockey surface to be the base for the table,

Even though our research led us to find more customer complaints about this table in terms of broken or missing pieces, it does also come with a 180 day manufacturer warranty. That means if your table was genuinely missing something, getting a replacement part shouldn't be an issue. But obviously, this can be frustrating and inconvenient if you're getting it as a holiday gift.

What we'd change: Rather than a white board, it would have been cool if it had something like chess or checkers. If this were the case, we might actually consider it a 4-in-1 table. 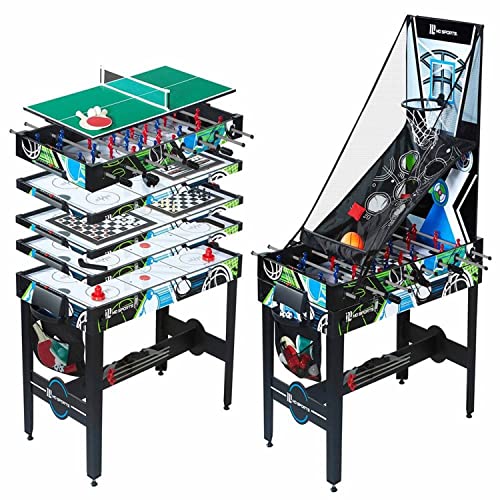 With the amount of games that it comes with, it's easy to see how this table could get a lot of complaints.

It's hard enough for many companies to deliver flawlessly on one table game. So, when you throw 12 others into the mix and try to combine them for a decent price, it's a recipe for disaster.

However, we found that if you are looking for a simple table that could potentially deliver on All Things Entertainment/Arcade for kids to never get bored, this could be the one.

This 12-in-1 table does feature some games that are not the most exciting, but still can help have fun and pass the time on a rainy day:

Regardless, we thought we had to list it here because of how versatile it is. If you don't mind risking some of the items being missing, then it might be worth giving it a shot.

Despite having some cheap parts, it also actually has air powered hockey, which the Voit table doesn't have.

When it comes to air hockey tables that also have other games, finding one that’s 100% perfect can be really difficult. While all the tables on this list have some element you must compromise, we think that MD Sports or Hathaway will make for some quality fun family time.

If you happen to find another table that you think deserves to be on this list, please do let us know in the comments below. It helps out our fellow table gamers and we’d love to hear from you!