If you own an arcade, pub, or other type of facility and wants to install an air hockey table, then getting a regular full-sized air hockey table isn't enough. You need something that's not only large and great for the game, but also accepts some form of currency to make an ROI. You're going to need either a commercial coin-operated air hockey table or a table that can be programmed to accept prepaid cards since hard currency seems to be going out of fashion.

Here's everything that you need to know...

Aside from accepting money, commercial air hockey tables should have some basic functionality if you want people to keep playing on them. While there are many large home air hockey tables that perform well with minimal use, they simply wouldn't hold up or be appropriate for an arcade, bar, or pub. The volume of players at any business facility will require a professional quality table.

Even though these features are technically hard to quantify, they will all be available on the top two commercial brands: Gold Standard Games and Dynamo-Valley.

We will touch on these features so you can understand why not to buy a random air hockey table from a big box retailer.

Heavy and Sturdy
You should be looking for a table that weighs at least 300 pounds. As things get crowded, spectators will be leaning and bumping into the tables despite your best efforts of keeping them away. Players also will lean on the table, especially if things are getting intense. If you don't get a heavy enough table, you're setting yourself up for failure and lots of repairs.

Commercial Blower
A commercial blower is necessary for proper movement of the puck on the table. For the sake of a table in a commercial establishment you need to be using heavy pucks (like the ones we talk about here). The light pucks that typically come with home tables have no place in an arcade or professional environment. Customers will be striking the pucks with all of their might, and if the pucks are too light, they're going to go flying off the table and potentially hit someone in the face!

However, not all blowers can support these heavy pucks. If the blower is too weak, a heavy puck will simply not move on the table or move extremely slowly at best.

To keep the pucks on the table and bouncing properly, well-built rails are another important element. If the density of the rails is a bit off it's going to result in puck stoppages, pucks flying off, and reduced ability to set up trick shots and execute any real air hockey strategy.

The type of rails we're talking about will come standard with all of the brands we've listed in this article.

If you're simply picking out an air hockey table for your home, all of the optional bells and whistles that tables can come with are less critical. When you're thinking about a commercial table, you're not only thinking about yourself, but about the customers.

If they aren't already into air hockey, what's going to attract them to play on the table in the first place?

That's where these additional immersive features come in. They aren't as necessary for the game as the key commercial attributes, but could make the necessary difference in your business depending on your clientele. These features are:

Lights
If you've got a place that's dimly lit, getting a table with flashy LED lights is going to draw people to want to gather around and play. Also, for a dark place, having a proper black light can be a totally awesome way to attract players. You'll find black light options on some of the overhead scoring fixtures. Sounds
In a loud arcade room or pub, having a table with sounds could be the difference between people noticing it or not.

Overhead Scoring & Monitors
If you're focused on tournament play, having overhead monitors and scoring is a great way to keep players engaged. They can also be programmed to keep track of tournament brackets and things of that nature.

As it relates to air hockey, shields are sturdy plastic barriers that can be put up on the sides of the table. Aside from aesthetics, these fixtures serve two major purposes that are important to buyers of commercial tables.

When it comes to ensuring that your air hockey table is a profitable investment, preventing damage to the unit and avoiding liability should be at the forefront of your purchasing decision. This is not to say that you have to have a shield, but it is something to consider.

When it comes to commercial tables, you only really have a handful of brands to choose from. There also some additional considerations that you should make when choosing from them:

With these questions in mind, we'll break down the most popular commercial brands:

*In the case of the quad tables, we've only seen one of these tables by Barron Games and were quite intrigued so figured we'd add it this article.

Gold Standard Games, AKA Shelti creates top of the line commercial air hockey tables. Their coin-operated tables are geared towards professional game play. Because their founder, Mark Robbins was a professional himself, the company takes a lot of pride in offering the best of the best for tournament play.  The only downside is that they don't seem to offer many smaller-than professional tables that accept any sort of payment. However, it may be possible to get something customized if you work with them directly because they do have smaller ones for home use.

Learn more about their coin-operated tables.

Valley-Dynamo is the other brand that dominates the market for commercial air hockey tables. If you've been to an arcade, you've probably seen their tables around. In fact, that's the table that our local arcade has and that you can see me playing on in the photo in the sidebar (or below this post if you've got a smaller screen).

The cool thing about Valley Dynamo is that they offer a few standard shorter table options for commercial applications. For example, their Best Shot and Blue Streak tables are shorter than the standard 99" long full sized tables, but still deliver all of the key attributes we talked about.  If you've got a smaller location, these could be just what you're looking for.

Learn more about their coin-operated tables.

Even though Brunswick is the company where air hockey originated from and has a sanctioned table on the USAA list, we can't seem to find it on their website. We're not sure if they still sell commercial air hockey tables, as the ones we've found seem to be mostly for home use. If you're interested in this brand for whatever reason, it's their Full-Sized Blue Top table that you should be looking for.

What Questions Do You Have?

Are you thinking about getting a commercial air hockey table for your establishment and have some questions? Please ask them below and we will do our best to get them answered ASAP!

Also, if you've got another brand of commercial table that you really enjoy, you can also fill us in below so we can be of further assistance to those in the market. 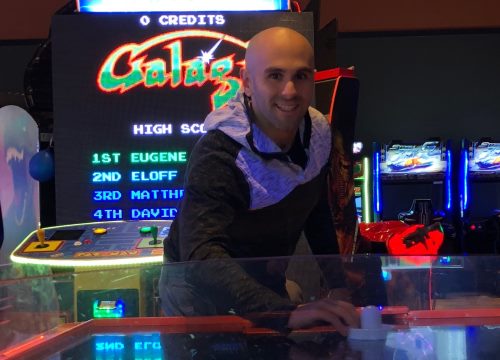